Variable is a name associated with a piece of memory that stores data and whose associated value may be changed  To declare a variable you need to write the Java variable type with giving it a name.

For example, let’s declare two variables. One is named  personName and has type String, other is named personAge and is of type int.

Now that we’ve declared a variable, we can give it a value. This is called initializing a variable. To initialize a variable, you just type the variable name followed by an equal sign, followed by the desired value:

Since you often want to initialize a variable right away, you can do so in the same statement as the declaration. For example, here we merge the previous declarations and initializations into more concise code:

In the picture below you can find basic terms that developers use for variables: 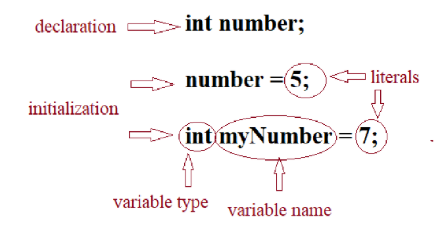 We declared 4 String variables were declared: str1, str2, str3, and str4. You can declare many variables in the same declaration in case they have the same type. You can also initialize any or all of those values inline. In the previous example, we have two initialized variables: str3 and str4. The other two variables remain declared but not initialized.

Pay attention to tricky things! This is where it gets tricky.

Let’s try one more example, how many variables do you think are declared and initialized in this code?

As you should expect, 3 variables were declared: i1, i2, and i3. If you look with the attention you will understand that only one of those values i3 was initialized. The other two are declared but not initialized.

That’s the trick. Each snippet separated by a comma is a little declaration of its own. The initialization of i3 only applies to i3. It doesn’t have anything to do with i1 or i2 despite being in the same statement.

Look at this line:

To make sure you understand this, see if you can figure out which of the following are legal declarations:

The first statement declares two variables without initializing them. The second statement declares two variables and initializes only one of them. Look at the third statement. It is not legal. Java does not allow you to declare two different types in the same statement. Variables d1 and d2 are the same types. They are both of type double. Although that’s true, it still isn’t allowed. If you want to declare multiple variables in the same statement, they must share the same type declaration and not repeat

Looking at the last line on its own, you can easily see that the declaration is invalid. And yes, the exam really does cram multiple statements onto the same line partly to try to trick you and partly to fit more code on the screen. In the real world, please limit yourself to one declaration per statement and line. Your teammates will thank you for the readable code.

Java has rules about identifier names. The same rules for identifiers apply to variables, methods, classes, and fields.

Java is case sensitive, so you can use versions of the keywords that only differ in case.

These examples are not legal:

The following examples are legal:

There are also code conventions for identifier names:

Before you start using a variable, it needs a value. Some types of variables are getting value automatically, some require the programmer to specify it.

There are two types of data in Java: primitive types and reference types.

Here are key points about types:

Let’s talk a bit more about numeric primitives. When a number is present in the code, it is called a literal.  Java assumes you are defining an int value with a literal. Look at the example below, the number listed is bigger and does not fit in an int type. There is a possibility to get maximum value for an int.

Java compiler will complain that the number is out of range. But it is for an int. However, we don’t have an int. To fix the problem we need to add the character L to the number:

Primitive Data types hold values in the memory where the variable is allocated, references do not hold the value of the object they refer to.  Reference type points to an instance of a class by storing the memory address where the object is located, a concept referred to as a pointer. Unlike other languages, Java does not allow you to learn what the physical memory address is. You can only use the reference to refer to the object.

For example, the following statements assign these references to new objects:

What is Java ? | Introduction 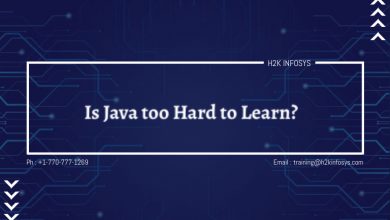 Is Java too Hard to Learn? 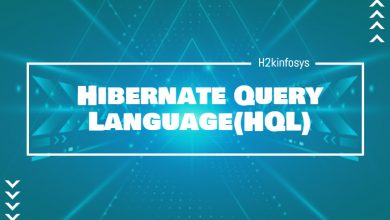 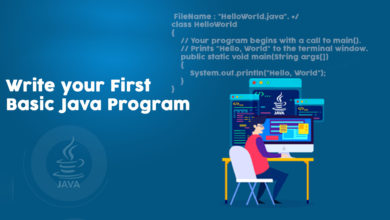 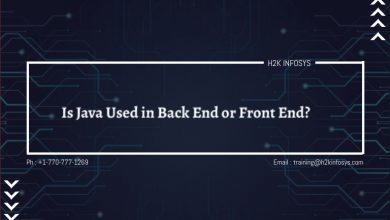 Is Java Used in Back End or Front End?